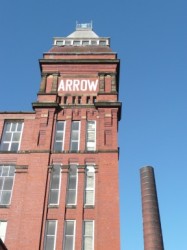 As you may be aware Arrow Mill is a Grade II listed building and when Simple Storage moved in back in 2010 we researched its history to add interest to our website.

In January 2012 finally received confirmation of the date Arrow Mill was built – before today we could not say for certain when the mill was constructed but we were aware it was definitely before April 1908 and after December 1897.

A 1971 edition of The Textile Mill Engine (Volume 2) by George Watkins states that ‘Arrow, containing five acres of floor space, was an example of the speed of mill building at the time. The contract to build was signed late in 1906, the first brick was laid in January 1907, the engine first ran under steam in February 1908, and the first cotton was spun in this large mill fifteen months after the first brick was laid’.

Thank you George Watkins and the owner of the aforementioned publication for bringing this invaluable piece of information to our attention. They certainly don’t build as quickly as that anymore!

[The HISTORY tab has now been updated to reflect this]

« Refurbished Office Space In Rochdale
The British Are Self Storage Buffs »