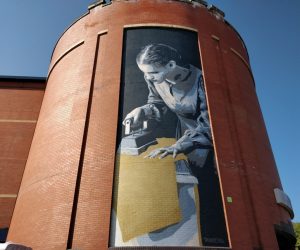 If you have been in Rochdale town centre recently you may have noticed a number of murals that have appeared on some of the buildings. These Rochdale Murals depict collectively what is known as ‘Rochdale Uprising’, and have been brought to Rochdale by a number of artists who have worked in conjunction with the local council to produce twelve new murals in and around the town. The purpose of these images is not only to inspire but to remind us of our industrial heritage.

One picture featured within this post is a tribute to the women of the cotton weaving industry by an artist known as Tankpetrol. This image can be seen on Baillie Street at the rear of The Wheatsheaf Centre, which back in 1910 was the site of a woollen mill.

This particular mural on its canvas of brick is a nod to the role women played in the cotton industry. It is based on a mid twentieth century photograph and depicts a woman ironing and mending a piece of cloth with meticulous care. Historically when cloth was woven on the loom it then had to be carefully inspected for imperfections and defects were usually repaired by hand operations. The process known as ‘burling’ is the removal of any foreign matter, for example in cotton fabrics these could be loose fibres. In the image the woman is ironing the cloth and this would be to even out its surface both to give it a smooth finish and to give it equal weight for market. This burling and mending process would almost exclusively be carried out by women, it was a highly skilled work and any imperfections found in the cloth would have been deducted from their wage.

In this ‘Information Age’ we have shifted rapidly from traditional industry that the Industrial Revolution brought through industrialisation, to an economy based on information technology and as we go about our business staring at the black mirrors of our technological devices we forget the past and our industrial roots. It is therefore fitting that Tankpetrol has produced a towering mural in our local town which is a stark reminder of a bygone era. The diligence of the worker has been carefully portrayed and should be an inspiration to anyone that sees it. 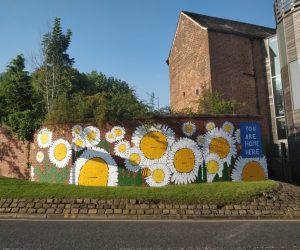 Staying on the theme of industry another mural depicting a collection of smiling daisies by Tasha Whittle can be seen on the side of the Rochdale Pioneers Museum. The mural is a homage to the daisies used as good luck charms by cotton weavers who would carve them onto their hand looms during Victorian times. The use of the daisy would have been symbolically powerful to the early cotton weavers. Initially known as ‘days eyes’ the flowers would open in the day and close at night. It was important for those early cotton weavers who always needed as much light as possible to work. Their cottages would be built to ensure that as much natural light as possible could filter in through the upper windows.

More information on the Rochdale murals.